Ocean City High School has had a strong history in track and field.

For the boys it goes back into the 1930s, when John Carey won all three throwing events in the state meet. There was Archie Harris, an Olympic quality athlete, plus Andy Jernee, John Henry, Leon Brown, John Richardson, Mike Stockley and Brett Johnson, to name a few.

This spring the OCHS boys finished 7-1 in dual meets, finishing second to Egg Harbor Township in the Cape-Atlantic League’s American Conference. They won the Cape May County Meet, were second in the Bridgeton Relays, third at Woodbury and sixth in South Jersey Group 3.

The girls were 5-2, finishing third in the conference. They also won the county meet, were third at Bridgeton, sixth at Woodbury and finished eighth in South Jersey Group 3.

The biggest difference between the teams is what will be returning in 2019.

Veteran boys coach Matt Purdue (55-35-2 in 11 seasons) has won the county meet all 11 years and finished in the top three in South Jersey Group 3 each of the last three seasons. Only Wayne Colman (153) and Ted Klepac (71) have won more dual meets at OCHS.

But when you look at the top performers on this year’s team, many of them accepted diplomas on Monday.

Sprinters Sean Zellers and Josh Rolls graduated. Rolls, who tied the school record in the 100 meters as a sophomore, only ran in two meets this year because of injury. Middle distance runner and hurdler Matt Zelinski is on to college; so are distance runners P.J. Short, Jesse Schmeizer and Korey Greene. Jumper Liam Bergman, pole vaulter Nick Oteri and throwers Jim Rice and Keith Larkin were all seniors this year. Plus Cian O’Donoghue and Chris Bailey.

Returning is sprinter and jumper Sophia Gresham, who set a new school record in the long jump. The old mark was set by Kellie Adams 24 years ago. Distance runner Alexa Palmieri had a great freshmen year in three sports and should be one of the CAL’s best the next three seasons. 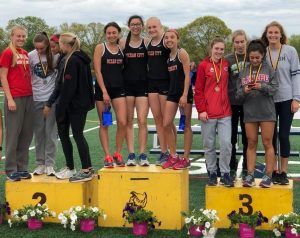 It looks like track and field at OCHS is doing just fine.

Coming this weekend – a look at 2018 OCHS baseball and softball.