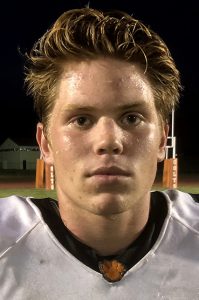 The Panthers scored touchdowns on each of their first five possessions and held Cumberland scoreless until the final two minutes of the contest in a 35-7 thrashing of the Colts under steamy conditions.

Karl Giulian’s 77-yard run on Middle’s first play from scrimmage was a harbinger of things to come as the Panther offense was crisp and efficient throughout the entire first half.

Quarterback Cameron Hamer scored from 13 yards out three plays after Giulian’s long run as Middle took the lead before the game was two minutes old.

A couple of long runs by David Hayes and a 20-yard run by Giulian set up Giulian’s one-yard score later in the first quarter.

After Carson Haas tackled a Cumberland running back for a loss on a fourth-and-one play, Middle drove 52 yards for another score, Hamer hitting Giulian with a five-yard touchdown pass.

Middle then recovered a fumble on a bad shotgun snap by Cumberland and Hamer hit Matt Marino for a 29-yard scoring pass three plays later to make the score 28-0.

Following the first of two blocked punts by Giulian, Hayes ran in from nine yards out as Middle took a 35-0 lead at the break.

Kicker John Carlson made all five of his extra-point attempts.

Cumberland prevented a shutout when Rae Robinson hit Ryan Williams for a 32-yard touchdown pass with 2:02 remaining in the game.