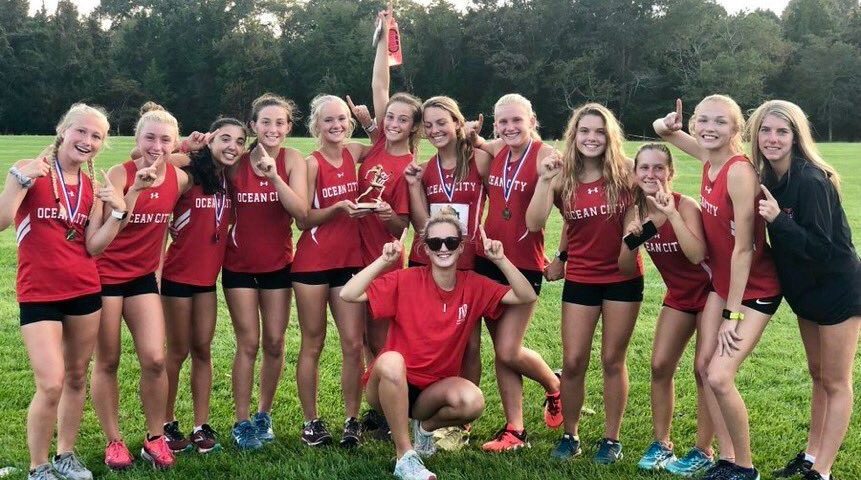 Weather and wet grounds have forced the postponement of two soccer games and a tennis match this afternoon. Only the field hockey game at Absegami is still scheduled to be played.

Girls soccer at Middle Township will be played on Oct. 12, boys soccer with Middle will be on Oct. 19 at Tennessee Avenue and girls tennis at Atlantic City will be Oct. 4.

Despite the postpo0nements, this is the beginning of an interesting week.

The girls cross country team can take another step toward a conference championship tomorrow in Millville. The girls trennis team had four matches in five days and the girls on the field hockey team and the boys soccer team each had three on the schedule. On Friday, the undefeated football team will face its toughest challenge at Carey Stadium against St. Augustine Prep and the boys cross country team will wrap up the week by running amongst the animals at Great Adventure in the Six Flags Invitational.

This week will be interesting – most of them will this fall season because every OCHS team is very much a championship contender.

But last week was really eventful.

It started with the boys soccer team facing undefeated St. Augustine Prep in a Cape-Atlantic League crossover game that was played at Talen Energy Stadium in Chester, PA, the home stadium of the Philadelphia Union. The two teams qualified to play the game in an MLS setting by selling tickets and raising funds for the Union. The Prep won the game, 2-0, but it was still an experience to remember for both teams, pictured below before it started. 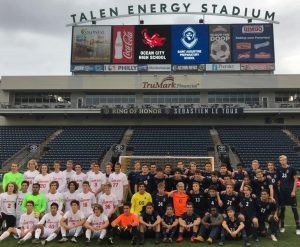 Aaron Bogushefsky’s team (4-3) went on to defeated Oakcrest, 3-1, in a conference game with Hunter Paone getting a goal and an assist and Trevor Paone and Luke Varallo adding goals. Then the Raiders lost to West Deptford, 1-0, in overtime.

OCHS is still undefeated and in first place in the National Conference and will have a chance to strengthen that position with a game at Cedar Creek on Wednesday and another with Absegami at Tennessee Avenue on Friday.

The next day, on Tuesday, something happened that hasn’t happened since Sept. 23, 2008. The Ocean City boys cross country team lost a meet. Matt Purdue’s Raiders had won 91 straight meets, the third longest win streak in OCHS sports history. The girls basketball team had the longest streak (119 games) that ended in 1979. And the boys tennis team (118) had the second longest streak, ended in 1984. The boys cross country streak passed the 90-meet win streak by girls track that ended in 1999.

The Raiders lost to Mainland, 25-31, though Anthony Conte and Gavyn Fox finished second and third, respectively, behind the Mustangs’ Kevin Antczak. But Mainland took the next three positions to take four of the first six. Ocean City’s Max Kelly was seventh and Luke Kramer eighth.

The OCHS boys (3-1) will run against Millville and St. Augustine on Tuesday at Millville Motorsports Park. Then, on Saturday, they will travel to Jackson for the event at Great Adventure. 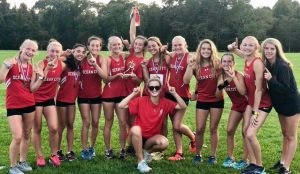 The girls soccer team (4-3-1) lost at Haddonfield, 2-0, last Monday and then defeated Oakcrest, 4-0, to remain one game behind Mainland in the conference standings. Delaney Lappin had the three-goal hat trick for OCHS and Alyssa Liebrand added a goal. Faith Slimmer had a pair of assists and Abbey Fenton notched her third shutout of the season.

The Ocean City field hockey team (6-1), which defeated Absegami today, 4-0, notched five straight wins to start the season before losing on Saturday, 2-1, to West Essex, the No. 4 ranked team in the state. The competitive game moved the Raiders up to No. 20 in the statewide rankings on NJ.com. Sophia Gresham had two goals and an assist today with Reese Bloomstead and Molly Reardon also scoring.

Jaclyn Charbonneau scored three times and Reardon twice in an 11-0 win over Bridgeton. And both Bloomstead and Readon had the three-goal hat trick in a 7-0 win over Egg Harbor Township. Maddie Kahn had four straight shutouts before the game at West Essex and added her fifth today.

Kelsey Mitchell’s Raiders, who have a one-game lead over Mainland and EHT in the conference, host Middle Township on Wednesday and Mainland on Friday – both at Carey Stadium. The Friday game will start at 3:30 because of the football game that follows.

The girls tennis team, which has quietly put together a 6-1 start to its season, won four times last week – beating Vineland, Middle Township, Millville and Bridgeton by a combined 19-1. The three OCHS singles players – Jordan Moyer, Gina Schmid and Kate Carter – were all 4-0 during the week and did not lose a single set. The first doubles team of Rosalie Graham and Brynn Bowman also had a perfect week.

Samantha DiMatteo’s team is scheduled to host Egg Harbor Township tomorrow and Absegami on Wednesday. They will go to Millville on Friday afternoon.