Middle sweeps its way to title at round robin tournament 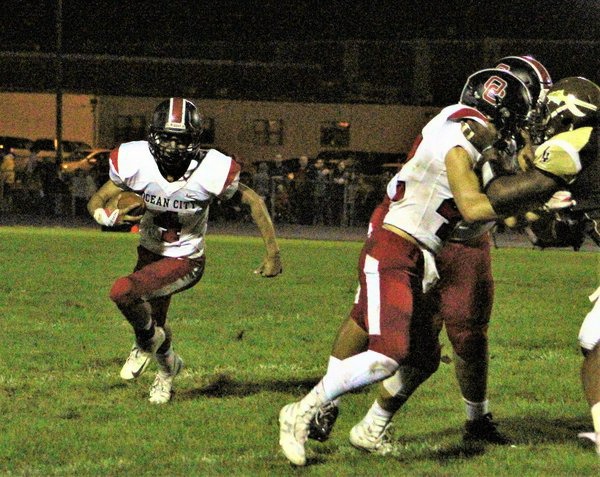 Kevin Kelly gets a block from Bill Kroeger

The Ocean City High School football team is 3-0 for the first time since 2000, before most of the players on this year’s team were born. And the Raiders have won in different ways, coming from behind in the first two wins and shutting out Absegami, 9-0, on Friday night after failing to score for the first 31 minutes.

There has been lots to cheer about. 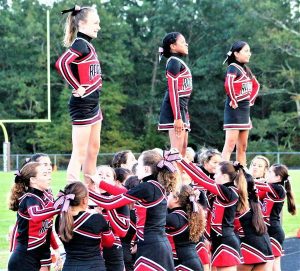 Now comes the No. 1 test of the regular season.

The Raiders return home on Friday night to host St. Augustine Prep in a West Jersey Football League (WJFL) crossover game. Ocean City and The Prep have played four times – the last one in 2015 – and St. Augustine has won all four.

The Hermits are 2-2 this year and are ranked No. 6 in South Jersey in the Online 25 (http://www.primeevents.net/calfootballx.html) with wins over Lenape and Shawnee and losses to No. 1 St. Joseph and State College (PA) High School.

When the game was announced as part of the re-aligned WJFL last spring, both Ocean City and St. Augustine initially looked for other options. The league allows crossover games to be changed by mutual agreement.

“Then we examined the new NJSIAA regulations,” said OCHS coach Kevin Smith, “and we realized the game had great benefits for us.”

If OCHS played St. Augustine on Friday and lost under last year’s rules, the Raiders would have received two points toward the NJSIAA power rating. Under this year’s new rules, they would get 30 points.

If the Raiders should upset The Prep under last year’s rules they would get 16 points, but a win Friday under this year’s rules would earn them 48 points.

Of course, if you’ve watched this OCHS football team play the first three weeks you know they will not enter Friday’s game realizing they will get great benefits from a loss. This is an intense team that plays hard and will never be satisfied with less than a win.

On Friday, the Absegami defense played tough, even stopping the Raiders on their first series when they started on Gami’s 24 yard line after Brandon Lin forced a fumble that Jake Inserra recovered. And the Braves used ball control effectively. The Raiders, who entered the game as the third highest scoring CAL team, only had the ball for 90 seconds in the first quarter.

Absegami later got to the Ocean City 18 after defensive lineman Sean Steward intercepted a pass. But Brandon Lashley would end that threat with his second interception of the season.

Another OCHS threat seemed to be stopped inside Absegami’s 10 in the third quarter but, on fourth down, junior Henry Souto kicked his first career field from 24 yards and Ocean City was on the board. 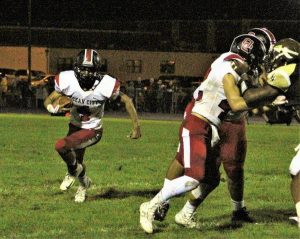 Kevin Kelly gets a block from Bill Kroeger and Dan Auberzinsky

In the fourth period the Raiders completed an 82-yard drive when quarterback Ian Aungst went over from the three for his third touchdown of the season. A pass to Jake Schneider and four strong runs by Kevin King highlighted the drive.

“Every time we go to Absegami it’s a battle, ” Smith said. “Last year the game wasn’t decided until Art Spackman’s unlikely pick-six with 1:00 left.  In 2014 we had to run down a Gami ball-carrier on the final play after he caught a hook and lateral and was going in for the tying score.  By those standards, Friday night was a breeze. 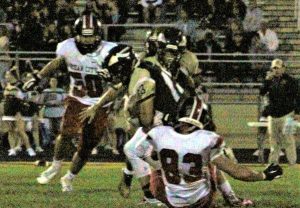 “Great job by our guys to persevere and get it done,” Smith said. “We talk a lot about handling adversity and Friday night presented its share.”

Ocean City has done what it has needed to do in the first three weeks. The Raiders have won three Independence Division games in the WJFL and sit in first place. Now they get ready for their biggest challenge of the regular season.

The complete Absegami box score, three-game OCHS stats totals and the full-game videos are all available at http://www.oceancitysports.com/ocfootball.html.

EXTRA POINTS: Green increased his career sack total to 10.5, moving up to fifth all-time at OCHS since sacks were first recorded in 1976. Rob Zauck (12.0) is fourth on the list and Ernie Nelson (21.0) is No. 1 …. King became the first Ocean City runner to have a 100-yard game this year. He gained exactly 100 yards in 10 carries …. Aungst threw for 139 yards at Absegami and has 533 yards in three games …. Lashley (175 yards), Schneider (156) and Bill Kroeger (103) are all among the leaders in receiving yards at Cape-Atlantic League schools …. the last time an OCHS football team was 4-0 was in 1998. That team won its first seven, lost a one-point decision to Millville and then went on to win a South Jersey championship …. check out all OCHS daily results and schedules in the Raider Diary – http://www.oceancitysports.com/OCDiary.html.