October started yesterday for Ocean City High School sports teams after an impressive September. All OCHS teams had winning records and a combined 42-10 record in the fall’s first month

Yesterday the OCHS field hockey team (9-1) continued its march toward a 26th Cape-Atlantic League championship and the 21st in the last 22 years. The Raiders spanked Vineland, 7-0, to remain undefeated in the American Conference. Ocean City’s only loss was 2-1 to West Essex, the No. 5 in the state. Jaclyn Charbonneau scored twice for Kelsey Mitchell’s team with Shannon Decosta, Nya Gilchrist, Sophia Gresham, Tara McNally and Molly Reardon (below) each adding a goal. Reardon also had two assists. Maddie Kahn only had to make one save for her eighth shutout of the season. 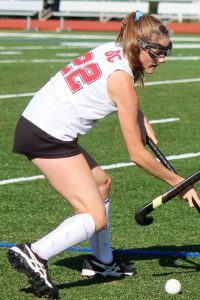 The Raiders host Atlantic City at Trish LeFever Field tomorrow and will host Haddonfield, ranked No. 15 in New Jersey, on Friday at Carey Stadium. Ocean City is currently ranked No. 17 in the state by NJ.com.

The soccer teams both lost to Mainland on Monday.

The girls (7-4-1) were beaten, 1-0, in overtime at Carey Stadium when Sage Glover scored in the first extra period with an assist from Kailyn Gallagher. It was the second time the Mustangs had beaten the OCHS girls, 1-0, and gives Mainland a two-game lead in the conference.

The boys soccer team (5-4) split its two decisions with Mainland. The Raiders won, 2-0, earlier this season at Carey Stadium and lost, 2-0, yesterday. The Raiders had beaten Absegami, 1-0, last week on an unassisted second half goal by Trevor Paone (below). Brian Calderon made four saves for his third shutout. 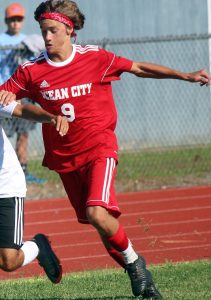 Aaron Bogushefsky’s boys still hold a one-game lead over Mainland and Middle Township in the conference. The loss to the Mustangs yesterday was Ocean City’s first in the conference. Mainland had lost to Cedar Creek. The Raiders still have two games left with Middle.

OCHS will host Lower Cape May at the Tennessee Avenue Complex tomorrow. The Raiders will play Eastern on Saturday morning at Carey Stadium,

The OCHS cross country teams will make their final appearance on their home course that finishes in Carey Stadium this afternoon with a dual meet against Atlantic Tech. 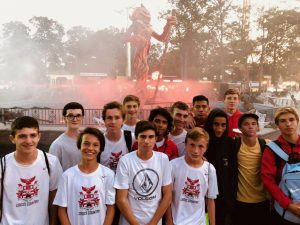 Over the weekend, the OCHS boys (above) finished first in the Six Flags Wild Safari Invitational at Great Adventure in Jackson. Matt Purdue’s team finished with 57 points to beat out second place Regis High School of Manhattan by 32 points.

Trish Henry’s girls (5-0) can take another step toward clinching their seventh CAL championship in the last eight years with a win today. Alexa Palmieri, Casey McLees, Becca Millar and Brooke Farr have helped the Raiders extend their remarkable record, winning 65 of their last 66 meets.

Samantha DiMatteo’s girls tennis team (10-1) opens play in the NJSIAA Group 3 Tournament tomorrow at 5th & Ocean against Cherry Hill West and then take on Mainland, the only team to beat them, on Thursday. Coast Sports Today will have more on Ocean City girls tennis later.

Check out daily results and schedules in the Raider Diary – http://www.oceancitysports.com/OCDiary.html.