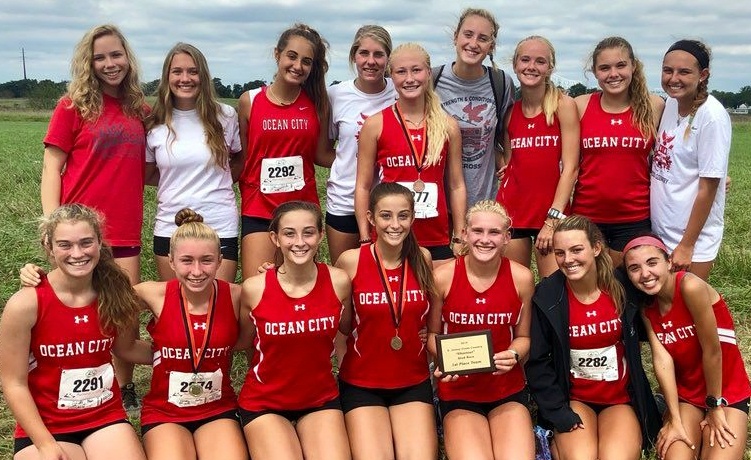 The Raiders won all seven of their varsity contests today to improve their October record to 18-3-1. OCHS teams were 42-10 in September.

Leading the way today was Trish Henry’s girls cross country team (8-0) which clinched the Cape-Atlantic League’s American Conference title for the second straight year and the seventh time in eight seasons by defeating Atlantic City, 17-44, and shutting out Absegami, 15-50. Ocean City has now won 11 league championships under Henry and 29 overall. 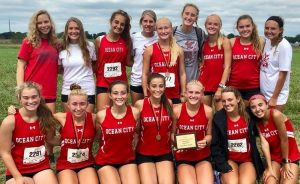 Alexa Palmieri led the way today followed by Casey McLees, Becca Millar, Brooke Farr and Theresa Grimley as the Raiders (above) extended the program’s record, winning 68 of their last 69 meets.

Henry takes her team to the Big Apple on Saturday to run in the Manhattan Invitational at Van Cortlandt Park.

Samantha DiMatteo’s girls tennis team (14-1) will be playing to hold the lead in the CAL’s American Conference tomorrow at Egg Harbor Township and will then face Mainland for the third time on Friday in Linwood in an NJSIAA South Jersey Group 3 semifinal. 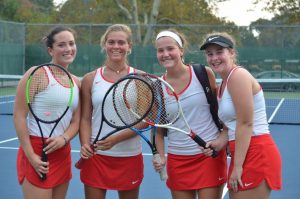 The Raiders defeated Vineland, 3-2, today after shutting out Central Regional, 5-0, Monday in a Group 3 match. In today’s win over Vineland, Jordan Moyer (10-5) and Gina Schmid (11-4) were both straight-set winners at the top two singles positions and the undefeated second doubles team of Nicole Blum and Ashley Devlin (15-0) also won. All five were winners against Central, including Kate Carter (10-4) at No.3 singles and the first doubles team of Brynn Bowman and Rosalie Graham (13-2). Ocean City’s doubles teams (above) are a combined 28-2.

The boys soccer team (9-4) made it three straight today with a 2-0 shutout of Oakcrest. Aaron Bogushefsky’s team is in first place in the conference and will win the title by winning its remaining games. The Raiders are also expected to be part of the new CAL Soccer Tournament that begins next week, probably with Mainland, St. Augustine and Pleasantville.

Fisher Hudak was involved in both goals today, assisting Luke Varallo on one and scoring the other with a penalty kick. He also scored the only goal in a 1-0 win over Eastern on Saturday. Hunter Paone and Trevor Paone each scored twice in a 7-0 win over Lower Cape May with Varallo getting three assists and Matt Brook two.

The OCHS field hockey team (10-2-1) tied Haddonfield, 1-1, and lost to Oak Knoll, 5-0, during a very challenging weekend. Ocean City is ranked No. 14 in the state, Haddonfield No. 13 and Oak Knoll No. 2. The final score could have been even worse against Oak Knoll but Raider goalie Maddie Kahn (below) made 21 saves against the once-beaten Royals, second only to Eastern in the state. Molly Reardon scored Ocean City’s only goal in the tie with Haddonfield, assisted by Jaclyn Charbonneau. Hahn made eight saves in that game. 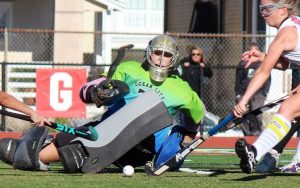 The Raiders have a two-game lead in the conference with five games left. Kelsey Mitchell’s team will play at Millville tomorrow and will host Bridgeton on Friday on Parents Day. Lenape comes to town Saturday for an afternoon game at Carey Stadium.

Kelly Halliday’s girls soccer team (9-4-1) won two straight after a tough overtime loss to Mainland. The Mustangs, who beat the Raiders twice by 1-0 scores, can clinch the conference championship by beating Cedar Creek on Thursday.

The OCHS girls go to Middle Township on Friday and will play a 10 a.m. game at Carey Stadium on Saturday against Clearview which will create a doubleheader with the afternoon field hockey game.